Barrel-type abdomen or beer belly might be a clue to gluten sensitivity or celiac disease. This alone may give the appearance of obesity. Beer is a potent gluten source. Gluten, the protein found in wheat, rye, and barley is very soluble in alcohol.

The starving malnourished fat person is an oxymoron: Overfed on the outside, undernourished on the inside.  Would that be an obese celiac?

Considered a wasting disease for over a century, celiac disease was defined as a condition marked by malnutrition and weight loss due to malabsorption of fat in the small intestine.

So can celiac disease and obesity exist together? Can someone who doesn't absorb fat be fat?  YES.

Coincidence of celiac disease and obesity was reported in the Scandinavian Journal of Gastroenterology (2007 42:60-65). Nineteen hundred people were screened for celiac disease during research undertaken by the University of Helsinki leading to a diagnosis of 36 cases. One half were overweight and one third obese classified by BMI(BMI range 20.1-41.5 kg/m2).

Dr. Nancy J. Lyons, author of An Unlikely Foe: CELIAC DISEASE EXPOSED believes the gluten-free diet can have a marked effect relative to weight and appearance for those who are sensitive to gluten. 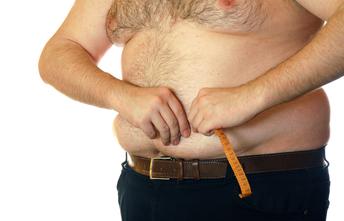