A New Model of Celiac Disease

The Gluten Tree maps key research-based facts and connects the gluten spectrum. Spectacular examples exist in the medical literature of dramatic disease remission due to the gluten-free diet that would not appear to be related to celiac disease.

I. Introduction: Challenging the Perspective of Celiac Disease

Novel Perspective: Celiac Disease is a Part of an Immune Symphony
Another way to look at celiac disease is that it is part of a larger systemic immune response to gluten.  Celiac disease is where we are looking—shining the light. Much is occurring outside the small intestine but is not yet diagnosable.

A. The Tree Roots

Gluten, genetic programming and the tTG II molecule interact chemically to  create a local immune response in the lining of the small intestine—that may be observable and diagnosable as celiac disease in a population pegged at about 1% of European descendants.  If gluten continues to be eaten, the response continues perpetually correlated with a malabsorption condition of the small intestine—celiac disease. Without eating gluten this response would not occur.

Additionally, a systemic immune response occurs.  Gluten reacts chemically with the tTG II molecule.  For reasons unknown, antibodies that target some form of the tTG II and gluten intermediate are made. Without eating gluten, this response would not occur.

Such antibodies that target tTG II are key because tTG II is a normal and widespread component in the body's organs and tissues. These "celiac-specific antibodies" are  detectable in the blood of celiac disease patients and remit in response to the gluten-free diet (GFD).

The immune response begun in the small intestine cascades via these blood-circulating antibodies. Potentially any healthy site in the body naturally expressing  tTG II can become the target. Antibodies that target tTG II are hypothesized here as key to gluten's effect outside of the small intestine. These antibodies are linked to the following:

1.Gluten-induced disease outside of the small intestine documented
a. brain and nerves
gluten ataxia: a neurological condition resulting in balance and limb in-coordination correlated to length of exposure to gluten involving the cerebellum part of the brain
schizophrenia:  A subset of those with this psychiatric condition respond to the GFD and in some cases dramatically. More research is needed to systematically study the effect of the GFD on  schizophrenic patients that also test positive for tTG II - targeting antibodies
b. liver
Advanced Autoimmune Liver Disease: A  subset of patients improve dramatically with the GFD.
abnormal liver-function tests: correlates in some with celiac disease and normalizes with the GFD
c. skin and hair follicle
dermatitis herpetiformis: a chronic itchy skin rash remits with the GFD
alopecia areata: a childhood hair loss condition can resolve with the GFD

The Gluten Tree maps the documented systemic effects of gluten. Key is the production of antibodies that circulate and target a normal and widely distributed molecule in tissue. While the GFD is prescribed as a treatment for celiac disease, many serious conditions respond to the GFD too.

The ultimate reason for the GFD—to prevent the production of antibodies that target  tissue transglutaminase II (tTG II).

A blood test that measures "celiac-specific" antibodies has been available for 17 years now! This test would be the most accurate predictor of those adults who might consider a lifelong GFD—with or without a diagnosis of celiac disease.

The blood antibody test is currently used as a screening for the intestinal biopsy to diagnose celiac disease.

NOTE: The book, An Unlikely Foe: CELIAC DISEASEEXPOSED provides the background material for the perspective built upon here. 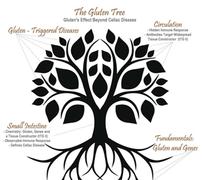