A blood test that measures "celiac-specific" antibodies has been available for over 17 years! This blood test would be the most accurate predictor of those adults who might consider a lifelong gluten-free diet--with or without a diagnosis of celiac disease. Why isn't this a routine test in America where wheat is the dietary staple?

Initiated by Gluten Antibodies are Key

Celiac-specific antibodies may target tTG II*-rich tissue within and outside of the small intestine via circulation.  The following diseases correlate with gluten exposure and evidence of tTG II antibodies.

A pioneering perspective of celiac disease and the spectrum of gluten-triggered illness.

The Gluten Tree maps gluten's whole body effect. Celiac disease is a condition of the small intestine by definition. Gluten's effect is bound by the limit of circulation. Celiac disease is perceived here as part of a gluten-triggered process; not a singular event or the end event. The gluten-free diet is key to more than celiac disease.

I. The Tree Roots: Fundamentals Leading to Celiac Disease 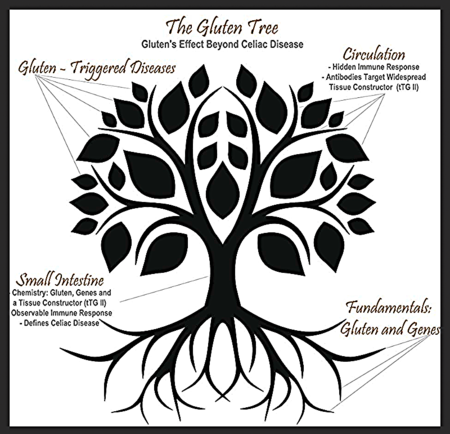 What to take away:

Medical societies create  the celiac disease profile including which symptoms to include. Outside of that boundary is a hidden frontier. A gluten-free diet, one without wheat, rye, and barley, can treat many serious diseases outside of the intestine. A gluten-free diet can also make many people feel great whom do not know why; some no doubt are outside that boundary.

Beyond the Small Intestine Beyond Celiac Disease

The Key: Antibodies to tTG II are made as part of  the  immune response to gluten.

The Machinery of Celiac Disease

A New Model Of Celiac Disease